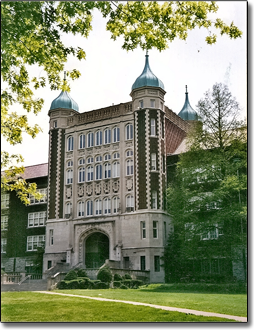 When gaslights were burning to light the way for new gas buggies, the present site of Roosevelt High School was then the Picker Cemetery that, with the city’s rapid advance, soon became surrounded by dwellings and factories. Education was also advancing, for the person with a high school education was more in demand. About 1922, the Board of Education of St. Louis decided to build a high school somewhere between the districts of Cleveland and McKinley High Schools and selected the old cemetery as an ideal location. After many transactions were made, the evacuation of the cemetery began on October 16, 1922 and, before long, the cemetery was cleared. The cornerstone of the school was laid on April 22, 1923, under the auspices of the Quentin Roosevelt Post of the American Legion. (Quentin Roosevelt was Theodore Roosevelt’s youngest son, who was killed in World War I) A crowd of 20,000 watched the laying of the cornerstone at 3:00 P.M. that Sunday afternoon. Some of the speakers were: Arthur M. Hyde, Governor of Missouri; Henry Kiel, Mayor of St. Louis; Alvin Owsley, National American Legion Commander and Lt. Colonel William A. Grey, who served with Theodore Roosevelt in the Spanish-American War. He was marshal of the parade, which marched from the Field Battery on Grand Avenue to the school site on that memorable afternoon. The style of the high school building is English Renaissance of the transition of the Tudor and Elizabethan periods and was built by the E.C. Gerbard Building Company at a cost of $1,611,100.48. The building was designed by R. M. Milligan, the architect, and E.S. Hallett, Chief Engineer, for the Board of Education.
The following was reported in 1936: The building has a normal student capacity of 3,168. It contains fifty-five classrooms, ten laboratories, two choral music rooms, one band room, swimming pool, three gymnasiums with dressing rooms, and six shops with wash rooms and material storage rooms.The auditorium seats 2,200 people. The lunchroom can easily accommodate 1,500 persons at one sitting. Many revisions and alterations have been made throughout it’s history but the basic exterior remains unchanged.
A major renovation was completed in the mid 1990s and with the exception of new individual student lockers the interior was restored to it’s pre-1940 décor and condition.

If you want a nostalgic fix go on a tour of our sacred halls. 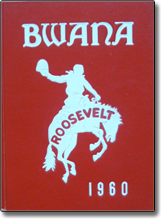 The name “Bwana” literally means “Great Chief.” When Teddy Roosevelt was on an expedition in Africa, the natives referred to him as a great chief because of his great hunting skills and courage.

The first Bwana was published in June 1925 after the school opened in January, 1925. The moderators, student editors and staff worked diligently and published two Bwanas in each of the first three years, 1925, 1926 and 1927. Starting in 1928 the Bwana was published annually through 2001 with the exception of 1986 when it went unpublished. The original Bwanas had soft covers and it was not until 1929 that the hardbound yearbook first made it’s appearance. The name “Bwana” last appeared on a Roosevelt yearbook in 1980 in an effort to be more politically understanding despite the name having originally been bestowed upon President Roosevelt by African natives.

The Bwana has been offered as not only entertaining reading material, but also as a book of memories to be opened in the years to come. It has served as a record of graduates, styles, athletics, clubs and what has happened in the hallowed halls of Roosevelt.

Later editions of the Roosevelt yearbook have given away to a very limited number of essays, stories and other journalistic endeavors in favor of less professional pictures and more student generated snapshots. These changes took place in the wake of increasing costs to produce a yearbook, the lack of a professional staff of photographers in the St. Louis Public School System and the advent of other media embraced by the typical high school student.

Our Bwana Library The alumni association maintains a set of Bwanas for use as references and we have a partial set used by our newsletter.
We also have an abundance of Bwanas and offer them for sale on an individual basis. Most years are available. Use the Contact Us page for more information.

Alma Mater The song which we hold so dear to our hearts, uses the melody of an old ballad, titled “Annie Lisle”, written in 1857 by Boston, Massachusetts, songwriter H. S. Thompson. It is about the death of a young maiden, caused by what some have speculated to be tuberculosis although the lyric does not explicitly mention tuberculosis, or “consumption” as it was called then. The song might have slipped into obscurity had the tune not been adopted by countless colleges, universities, and high schools worldwide as their respective alma mater songs. The first college to have used the tune in a spirit song seems to have been Cornell University. In 1870, students Archibald Weeks and Wilmot Smith wrote “Far Above Cayuga’s Waters” and used an adaptation of Thompson’s melody. Many other colleges and high schools, likely influenced by Cornell’s version, have since created their own renditions. Our own Missouri University is one of these; Thier university song is “Old Missouri” with lyrics written in 1895, and sung to the tune of “Annie Lisle”.

Theodore Roosevelt, not quite 43, became the youngest president in the nation’s history. He took the view that the president as a “steward of the people” should take whatever action necessary for the public good, unless expressly forbidden by law or the Constitution.

Roosevelt’s youth differed sharply from that of the log cabin presidents. He was born in New York City in 1858 into a wealthy family but he also struggled – against ill health – and because of this, he became an advocate of the strenuous life.

In 1884, his first wife, Alice Lee Roosevelt, and his mother died on the same day. Roosevelt spent much of the next two years on his ranch, in the Badlands of Dakota Territory. There, he mastered his sorrow as he lived in the saddle, driving cattle, hunting big game – he even captured an outlaw. On a visit to London, he married Edith Carrow in December 1886.

During the Spanish-American War, Roosevelt was Lt. Colonel of the Rough Rider Regiment, which he led on a charge at the battle of San Juan. He was one of the most conspicuous heroes of the war.

Aware of the strategic need for a shortcut between the Atlantic and Pacific, Roosevelt ensured the construction of the Panama Canal.

He won the Nobel Peace Prize for mediating the Russo-Japanese War, reached a Gentleman’s Agreement on immigration with Japan and sent the Great White Fleet on a goodwill tour of the world.

Leaving the Presidency in 1909, Roosevelt went on an African safari, then jumped back into politics. In 1912, he ran for President on a progressive ticket. To reporters, he once remarked that he felt as fit as a bull moose, the name of his new party.

While campaigning in Milwaukee, he was shot in the chest by a fanatic. Roosevelt soon recovered, but his words at that time would have been applicable at the time of his death in 1919: “No man has had a happier life than I have led; a happier life in every way.”

The Roosevelt High School Alumni Association had its origin when  alumni were assisting the St. Louis Public Schools Foundation in the 80th Anniversary Celebration of the laying of the cornerstone of the present school on Saturday, May 17, 2003.
The association was founded shortly thereafter, with the adoption of  the original Constitution on February 24, 2005. First officers were elected in March, 2004, thru March, 2005; they being Heinz Zobel, President,  LaSaundra Lee, Vice President,  Cynthia Watson Borisch, Secretary, and Jeannette Rammelsburg, Treasurer. The  goal was the “Supporting school, faculty and students through our time, talent and treasure.”
On Saturday, May 21, 2005, the alumni association held an 80th Anniversary Celebration of the first graduation class of 1925 and honoring four graduates with alumni scholarships in the school auditorium.
The Alumni Association supports the school and students in many ways: It provides financial support through its scholarship program, offering two ough the website.  Additional information and photos of the current scholarship winners can be viewed on this link. This program has been funded by our scholarship fundraising drives, the many contributions by individuals and donations from class reunions.  All contributions are tax deductible. Some of the many ways the association has supported the school and students, in addition to providing scholarships, are the design and installation of an eight by sixteen foot Roosevelt High School sign located at the corner of Compton and Gravois avenue, new shoes for the cheer-leading team, new uniforms for the baseball team, sponsorship of a breakfast for the football team and the refurbishing of eight computers for the school library. Recently we  turned over to the school our entire collection of memorabilia Bwanas, letter sweaters, badges emblems, class pictures etc. plus a public address system.

The association is a not-for-profit, charitable organization registered as a 501(C)3 and is registered with the State of Missouri, Office of the Secretary of State.